The History of Vityaz Submachine Gun 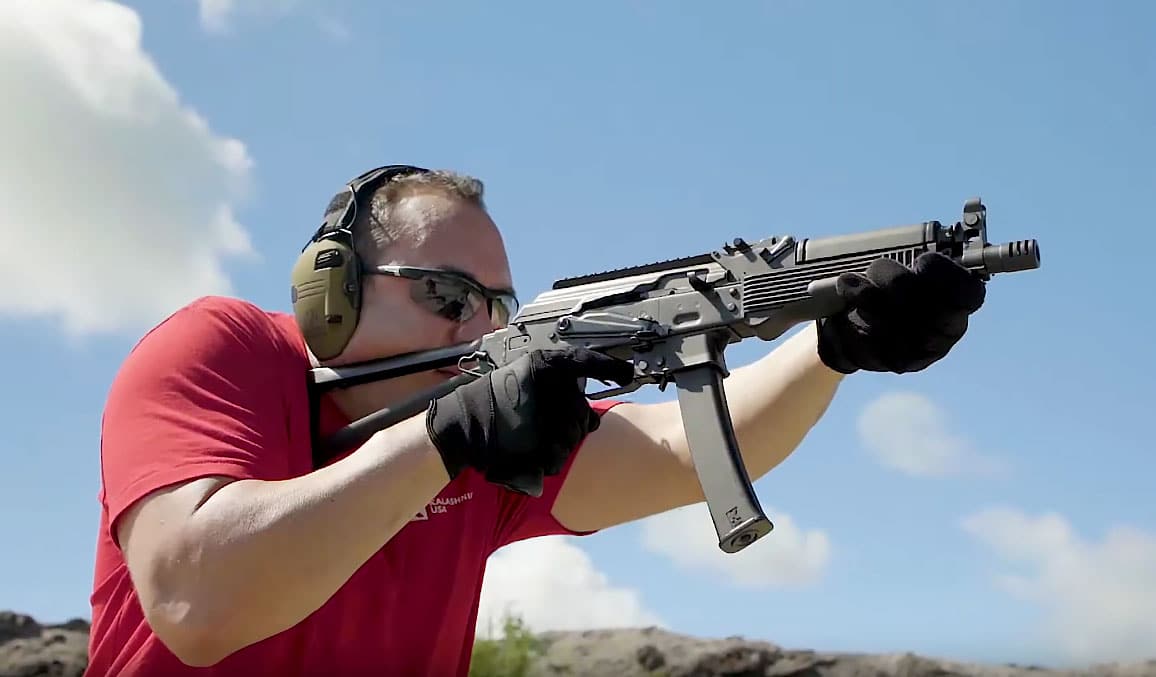 The World is Not Enough

By the end of the 20th century, the Russian designed AK rifle had become the most widely manufactured firearm in history.  Figures varied but knowledgeable observers estimated that perhaps as many as 100 million weapons could be found in almost 100 countries. The AK’s intermediate-sized 7.62×39 millimeter cartridge, and its 5.45×39 millimeter descendant, had also largely displaced full-sized rifle cartridges and the small pistol-size cartridges used in submachine guns (SMGs).

With the success of the AK’s 7.62mm and 5.45mm offerings, why then did Russia turn the clock back and re-introduce a 9mm submachine gun like the Vityaz? It was a noticeable departure from the Sturmgewehr (i.e. assault rifle) concept perfected by Mikhail Kalashnikov’s select- fire AK-47 and which later influenced Eugene Stoner’s M-16. These guns replaced the cumbersome bolt action and semi-auto rifles used in World War II.  Their new, lighter designs also made obsolete the first and second generation submachine guns used during the war including the Thompson, Sten, MP40, M3 “Grease Guns” and the PPSh-41.  Eventually, the new full-auto capable weapons displaced even the popular post-war Uzi SMG.

While the 1950s saw the US and NATO develop and adopt the M-14, FAL and G3 battle rifles, those full-size 7.62×51 millimeter firearms represented the end of the line for large, weighty infantry weapons. The M-14 saw its relevance fade in less than a decade, deemed too heavy and unwieldy for the close-in jungle warfare that characterized the Vietnam War.  The M-16 replaced it in frontline service. By the end of the 20th century, the FAL and the G3 would also be replaced by lighter and more maneuverable small arms, many of them of Kalashnikov or Stoner origin.

Eastern Europe in particular saw the widespread adoption of Kalashnikov’s AK-47, AKM and AK-74 series of rifles (this will covered in greater detail in a future article).  These new weapons fired the smaller 7.62x39mm and 5.45x39mm rifle cartridges.  Tens of millions of them were manufactured by the former Soviet Union and its Warsaw Pact allies including Poland, Bulgaria, East Germany, Hungary and Romania.  China and North Korea also copied the Kalashnikov design and produced them in large quantities.  Many of these firearms ended up being exported to revolutionary movements and Third World countries aligned with the communist ideology of the USSR or the People’s Republic of China.  As a result, AKs became ubiquitous in Cold War conflicts in Vietnam, the Middle East, Afghanistan, Africa and Central America.

The M-16 and the AK-47/AKM/74 are excellent weapons but their compact cartridge cases still produce high pressure levels when fired. For example, 5.56x45mm ammunition typically operates at 55,000 psi of chamber pressure whereas 7.62x39mm ammo runs at 45,000 psi. The 5.45x39mm cartridge, with its smaller bullet diameter, functions at 41,000 psi. Compare those numbers to a standard 9mm Luger round generating 35,000 psi.  It is evident that these rifle cartridges will provide greater muzzle velocity, range and superior terminal effects when compared to 9mm pistol ammunition.  However, that increased performance requires heavier and larger receivers (versus a SMG) and they require a minimum barrel length to burn the cartridge’s gunpowder efficiently.  Bullpup designs such as the Steyr AUG, Israeli Tavor and FN’s F2000 have tried to reduce overall size– while maintaining adequate barrel length– but they have spawned their own design compromises and faced limited commercial success. The same can be said of recent “personal defense weapons” (PDWs) such as FN’s P90 or the HK MP7.  These are ultra-compact firearms firing micro-sized, bottlenecked cartridges like the 5.7x28mm (50,000 psi) or the smaller 4.6x30mm (58,000 psi).  Many experienced ballisticians, not to mention combat veterans, have questioned the effectiveness of their minuscule bullets.

This tradeoff between weapon size and cartridge efficiency was not lost on Russia’s arms designers.  The downsizing of the AK-74 into the 8” barreled AKS-74U (aka the “Krinkov”) made for a much more compact weapon but came with hellacious muzzle flash, decreased controllability and reduced effectiveness of the 5.45mm round.  It was introduced to Russian airborne and special operations units in the early 1980s but soon fell out of favor, replaced by the longer-barreled AK-105. Many AKS-74Us were transferred to law enforcement units.  They too noticed the tradeoff produced by an 8” barrel firing a high pressure rifle cartridge.

Back to the Future in Firearms Design

Soon thereafter, Russia’s Interior Ministry (responsible for federal police forces) requested the development of a new submachine gun.  They surely noticed that at least one SMG, Germany’s excellent MP5, continued to cling to life despite the proliferation of short-barreled AKs like the AKS-74U and shortened M-16 variants used by the US and other NATO countries.

In response to the Ministry’s request, Russia’s arms designers introduced the PP-19 Bizon submachine gun in 1996.  It was based on the 9x18mm Makarov pistol cartridge and used a unique helical drum magazine holding 64 rounds. The Bizon was later offered in 9x19mm as well.   It utilized many of the same parts as the AKS-74U but in a smaller and simpler blowback operated design. Unfortunately, the Bizon’s magazine was bulky, cumbersome to load, expensive to manufacture and it proved unreliable. As a result, the weapon failed to attract sufficient government or commercial orders.

The Bizon’s original designers, Victor Kalashnikov and Alexie Dragunov, then went back to the drawing board and dropped the problematic helical drum magazine.  In its place, they fitted a 9x19mm double stack, double feed curved magazine whose design borrowed heavily from that used in the successful Cold War era 7.62x25mm PPS-43 submachine gun. This new magazine features robust polymer construction (with steel reinforcements) and can be quickly and conveniently loaded using stripper clips.  A self-loading firearm is only as reliable as its feeding mechanism— and this one is superb.

The Vityaz combines accuracy and ruggedness in a very compact design.  When folded, the six pound gun measures just 18.25” overall.  It is shorter than a standard MP5A3 submachine gun which measures 21.7” with its retractable stock collapsed.   Both guns have similar length barrels with the Vityaz sporting a 9.25” barrel compared to the MP5’s 9” barrel.

The Russian designed Vityaz submachine gun has proven itself to be a reliable, blowback operated firearm.  It is very competitive with other successful SMGs and, when fed modern 9mm ammunition, can engage targets up to a maximum range of 150-200 meters.

The Journey Continues: the Vityaz comes to America

The story of the Vityaz is far from over. In our next article, we’ll take a look at Kalashnikov USA’s excellent semi-auto version of the Vityaz, made entirely in America. We will examine how they took a proven weapon system and made it even better with subtle—but important— improvements for the US consumer. The resulting firearm is called the KP-9 and is available as a pistol, 16” carbine or NFA short-barreled rifle (SBR).  This new Vityaz is especially suitable for 9mm PCC competition, home defense or informal target shooting.  It also works very well when fitted with a sound suppressor.  Stay tuned for a complete review!

Subscribe to our newsletter and stay tuned for our upcoming stories and articles.

Previous Post
Next Post
Related Posts
Don't miss out again! Be the first to know when this product is back in stock.